Experience the Evolution of WONDER WOMAN™ with her Invisible Jet Convention Exclusive! 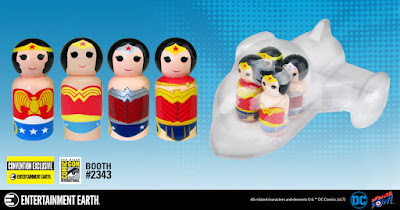 A limited edition created just for the convention, each 2-inch retro-style Pin Mate wooden figure is individually numbered within the DC Comics Pin Mate series and is highly detailed with bright beautiful colors all the way around the figure. Four wooden Pin Mate figures along with the WONDER WOMAN™ Invisible Jet are included in the set, and each figure shows the progression of WONDER WOMAN™ through the eras of her memorable legacy. With only 1,200 sets available, this convention exclusive is ready to take off and disappear at the blink of an eye.

New more information? Head over to Entertainment Earth News for all of the Wonder-ful details.

The first opportunity for fans to grab this limited-edition item will be at San Diego Comic-Con on July 20, 2017 in the Entertainment Earth booth (#2343)!

(*NOTE: This item will first be sold during San Diego Comic-Con 2017 at Entertainment Earth Booth #2343. If supplies remain after the show, pre-orders will be filled and shipped to you then – in August 2017.)