Limited Edition Mystic Seer is Back by Popular Demand 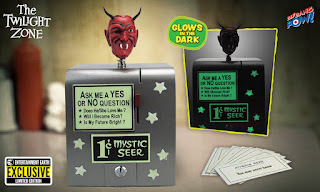 Back by popular demand, dedicated fans of The Twilight Zone have waited 10 years for another chance to bring home their own mysterious Mystic Seer and the wait is finally over! This updated edition features a redesigned series-accurate head sculpt and Glow-in-the-Dark design elements. This fully functioning The Twilight Zone Mystic Seer Glow-in-the-Dark 1:1 Scale Prop Replica from Bif Bang Pow! Glow-in-the-Dark elements, a real napkin holder (napkins not included) and a coin slot with a working lever on the front that magically dispenses your “fortune”! The Mystic Seer is a limited edition of 350 pieces and comes with a certificate of authenticity and premium packaging. Other versions have sold out so don’t wait and order yours today before they disappear into The Twilight Zone again! Available for pre-order at Entertainment Earth .
Post a Comment
Read more 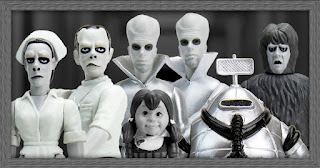 We entered The Twilight Zone and came back with some of our most popular 3 ¾-inch scale action figures featuring updated color palettes and packaging design. These black and white authentically designed and rendered action figures bring to life some of the most chilling characters from memorable episodes of The Twilight Zone. From the episode entitled, "Eye of the Beholder," Doctor Bernardi has a silver stethoscope and the Nurse’s shoes are now black while both have a darker scrub color. What’s that out the window? It’s the Gremlin, from "Nightmare at 20,000 Feet" with a darker body color. Back on Earth something has arrived. From the episode aptly titled “The Invaders” comes the Invader action figure with the rings on its body updated to black. That’s not the only otherworldly visitor to Earth. From "To Serve Man", Kanamit is updated with two different looks. In one, his outfit has glitter accents and the other has a silver metallic finish. Last but cer
Post a Comment
Read more 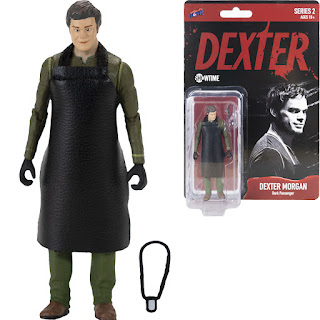 Dexter action figures are back, just in time for the long-awaited return of Dexter: New Blood in 2021 on Showtime. The Series 2 "Dark Passenger" and “Dark Defender” 3 ¾-inch scale versions of Dexter Morgan are based on the signature looks of the forensic technician / serial killer from the original series. These limited edition action figures are available at select Target stores today!
Post a Comment
Read more

- August 02, 2020
Pick up our limited edition Joker Jack-in-the-Box, Batcycle with Batman and Robin Pin Mates® along with our KISS Psycho Circus and Rock and Roll Over action figures available at select Target stores today!
Post a Comment
Read more

At San Diego Comic-Con 2017, celebrate the life and legacy of both Spock and the actor who brought him so memorably to life, Leonard Nimoy, with the debut of this resin Star Trek: The Original Series Talking Spock Bobble Head - Convention Exclusive from Bif Bang Pow!. Standing 6-1/4 inches tall (excluding his Starfleet delta-shaped base), this Convention Exclusive presents Spock in his blue sciences officer’s tunic and black uniform trousers. Plus, with the push a button found on the base, you can hear six sounds clips from the show: “Transporter room, ready to beam up”; “Insufficient facts always invite danger” (from “Space Seed”); “Vulcans never bluff” (from “The Doomsday Machine”); and the signature Spock sayings, “Fascinating,” “Highly illogical,” and “Live long and prosper.” Want more details? Beam over to Entertainment Earth News for all the logical specs. The first opportunity fans can grab this individually numbered and limited-edition exclusive will be at San Diego
Post a Comment
Read more 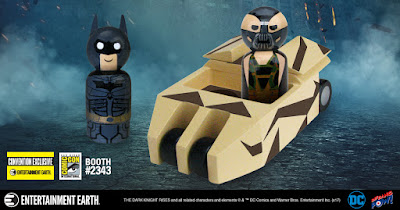 BATMAN™ fans, rejoice! Combining the familiar old-school wooden figures, with a modern film aesthetic, this  new BATMAN™ set  is gearing up for San Diego Comic-Con!. Inspired by  The Dark Knight Rises , this camo BATMOBILE™ is both instantly recognizable and unique. Packaged with two individually numbered, retro-styled Pin Mate figures of BATMAN™ (#47) and BANE™ (#48), this set delivers on the excitement in a miniature 2-inch scale.  For more details, head over to Entertainment Earth News . Not attending San Diego Comic-Con 2017? *Pre-order the  Camouflage BATMOBILE™ and Pin Mate Exclusive Figures  at Entertainment Earth now! ( *NOTE:  This item will first be sold during San Diego Comic-Con 2017 at Entertainment Earth Booth #2343. If supplies remain after the show, pre-orders will be filled and shipped to you then – in August 2017.) Continue to check Entertainment Earth for the  latest convention exclusive news . THE DARK KNIGHT RISES and all related characters
Post a Comment
Read more
More posts