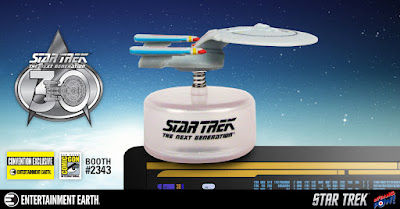 You don't have to travel to the 24th century to get this Galaxy-class, fifth Federation starship! Celebrate the 30th Anniversary of Star Trek: The Next Generation with your own U.S.S. Enterprise NCC-1701-D at San Diego Comic Con.

With only 350 available, this limited-edition miniature bobble will be gone in warp speed. For all the stellar specs, head over to Entertainment Earth News for more details.

The first opportunity for fans to grab this limited-edition Monitor Mate will be at San Diego Comic-Con on July 20, 2017 in the Entertainment Earth booth (#2343)!

(*NOTE: This item will first be sold during San Diego Comic-Con 2017 at the Entertainment Earth Booth #2343. If supplies remain after the show, pre-orders will be filled and shipped to you then, in August 2017.)