Whose Team Are You On? New Captain America vs. Iron Man Pin Mate Set! 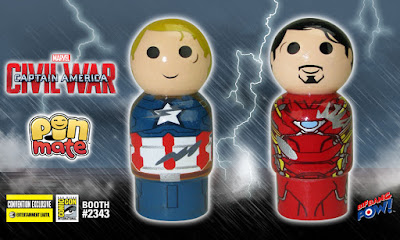 Two different philosophies from two very different Super Heroes. Who will you follow into battle? Well, lucky for you with the Captain America: Civil War Captain America vs. Iron Man Pin Mate Wooden Figure Set of 2 - Convention Exclusive from Bif Bang Pow! you don't have to choose. 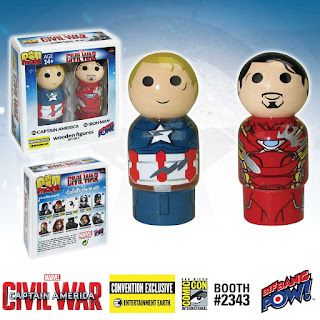 Only from Entertainment Earth will you find this convention exclusive! A collector and fan must-have, this battle-damaged Captain America and Iron Man wooden figure set celebrates the epic clash between Steve Rogers and Tony Stark from the 2016 film Captain America: Civil War. Each figure measures a mere 2-inches tall and is individually numbered within the series (included on the packaging as well as the bottom of each figure): Captain America is number 1, and Iron Man is number 2.

Designed to highlight the movie-inspired costumes, each retro-style figure is wrapped in 360-degree, hand-painted artwork that includes some decal elements. Limited to only 1200 sets, the personalized production of the hand-painted artwork gives each figure a one-of-a-kind authenticity that cannot be duplicated. Plus as an Entertainment Earth Convention Exclusive, each limited edition set is individually numbered with a holographic sticker - making this already highly collectible set even more collectible! Ages 14 and up.