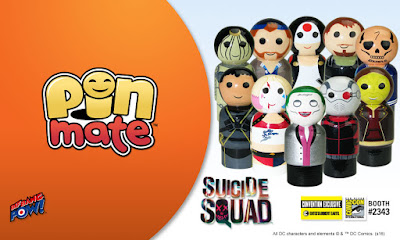 Featuring one of the most anticipated movies of the summer, the Suicide Squad Pin Mate Wooden Figure Set of 10 - Convention Exclusive from Bif Bang Pow! is set to wreak havoc while trying to save the day during San Diego Comic-Con at the Entertainment Earth Booth (#2343).

A must-have for any DC Comics fan, this never-before-seen wooden figure set showcases 10 of the most sinister Super-Villians that are so bad they could be used for good. Individually numbered within the series, every figure is numbered on the bottom as well as on the packaging. SLIPKNOT™ is number 2; BOOMERANG™ is number 3; KATANA™ is number 4; ENCHANTRESS™ is number 5; RICK FLAG™ is number 6; THE JOKER™ is number 7; HARLEY QUINN™ is number 8; DEADSHOT™ is number 9; KILLER CROC™ is number 10; DIABLO™ is number 11. 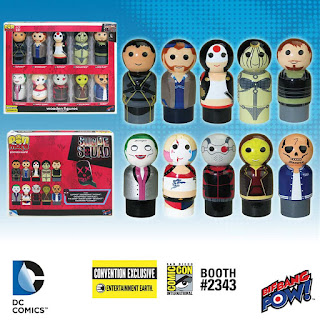 Designed in a retro-style and measuring a mere 2-inches tall, each figure is wrapped in 360-degree, hand-painted artwork that includes some decal elements. Limited to only 1500 sets, the personalized production of the hand-painted artwork gives each figure a one-of-a-kind authenticity that cannot be duplicated. Plus as an Entertainment Earth Convention Exclusive, each limited edition, movie-inspired set is individually numbered with a holographic sticker - making this already highly collectible set even more collectible! Ages 14 and up.