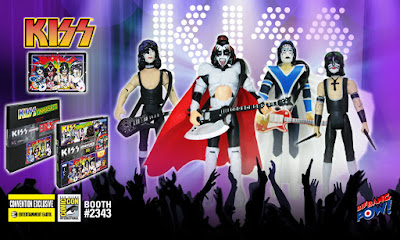 The Demon, The Starchild, The Spaceman, and The Catman figures each feature 11 points of articulation (neck, shoulders, biceps, elbows, hips, and knees) and come with corresponding never-before-seen instrument accessories, including the debut of The Demon's Axe bass guitar, The Starchild's cracked mirror guitar, and The Catman's black drumsticks. The set also includes miniature paper mask cutouts - as depicted on the album cover. 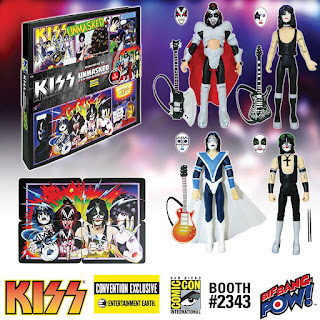 But that's not all! In addition, every set comes with 4 large wood drink coasters that (when put together) create the poster artwork, which was included with the Unmasked album! Plus limited to only 1000 sets, each  Entertainment Earth Convention Exclusive is individually numbered with a holographic sticker. Prototyping by 3D Systems a.k.a. Gentle Giant. Ages 14 and up.

Available for the first time on July 20, 2016 at the Entertainment Earth booth #2343 at San Diego Comic-Con, fans will have the first opportunity to grab this individually numbered and limited edition exclusive as well as a FREE gift with purchase - while supplies last! 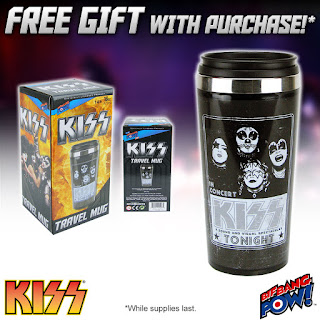 Check out all the rocking KISS merchandise from Bif Bang Pow! - only at Entertainment Earth.
action figures Catman KISS Spaceman Starchild The Demon