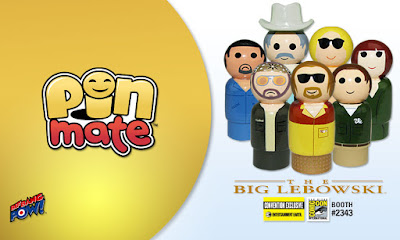 A collector must-have, this coveted set of seven wooden figures is based on the Coen brothers' 1998 classic film The Big Lebowski. Individually numbered within its series, every figure is numbered on the bottom as well as on the packaging. The Dude is number 1; Walter is number 2; Donny is number 3; Jesus is number 4; Maude is number 5; The Stranger is number 6; and Bunny is number 7. 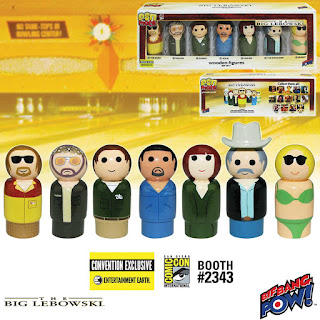 Designed in a retro-style and measuring a mere 2-inches tall, each figure is wrapped in 360-degree, hand-painted artwork that includes some decal elements. Limited to only 800 sets, the personalized production of the hand-painted artwork gives each figure a one-of-a-kind authenticity that cannot be duplicated. Plus as an Entertainment Earth Convention Exclusive, each limited edition set is individually numbered with a holographic sticker - which makes this already highly collectible set even more collectible! Ages 18 and up.

Available for the first time on July 20, 2016 at the Entertainment Earth booth #2343 at San Diego Comic-Con, fans will have the first opportunity to grab this individually numbered and limited edition exclusive!

See all The Big Lebowski collectibles from Bif Bang Pow! - only at Entertainment Earth.