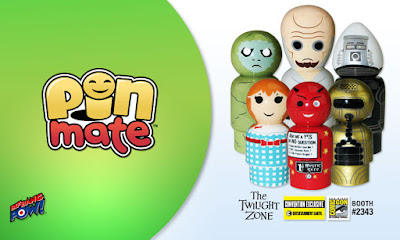 The Twilight Zone Pin Mate Wooden Figure Set of 6 - Convention Exclusive from Bif Bang Pow! features six classic, beloved characters re-imagined for the very first time as rare color Pin Mate™ collectible wooden figures - available only at Entertainment Earth. A must-have for any fan of The Twilight Zone, this never-before-seen wooden figure set showcases episode-specific characters, which are individually numbered within the series (included on the packaging as well as the bottom of each figure). 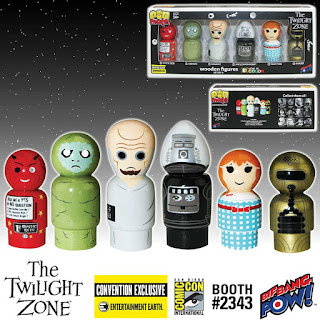 Designed to highlight the characters in color, each retro-style figure is wrapped in 360-degree, hand-painted artwork that includes some decal elements. Limited to only 800 sets, the personalized production of the hand-painted artwork gives each figure a one-of-a-kind authenticity that cannot be duplicated. Plus as an Entertainment Earth Convention Exclusive, each limited edition set is individually numbered with a holographic sticker - making this already highly collectible set even more collectible! Ages 14 and up.