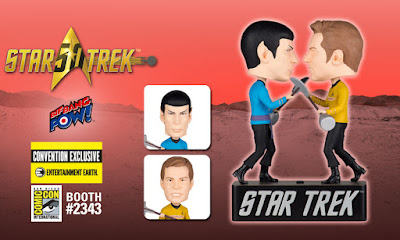 Captain James T. Kirk and First Officer Spock square off in a duel to the death in this spectacular bobbling duo taken from the "Amok Time" episode of Star Trek: The Original Series. Standing on a Star Trek-themed base (measuring 7-inches tall x 4 3/4-inches wide), Kirk and Spock battle and bobble with lirpa weapons in hand! 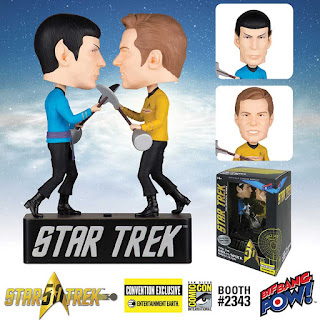 With a simple push of a button, the iconic fight scene's music plays from the extraordinary resin piece - bringing the duel intensity to life. Limited to only 2,502 pieces, each Entertainment Earth Convention Exclusive is individually numbered with a holographic sticker. Sound device includes 2x LR44 (AG13) 1.5v batteries that are replaceable. Ages 14 and up.

The first opportunity fans will have to grab this limited edition Star Trek 50th anniversary exclusive will be at San Diego Comic-Con on July 20, 2016 in the Entertainment Earth booth (#2343)!