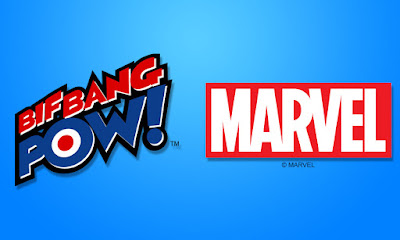 "From Asgard to Midgard and everywhere in between, we're thrilled to have the opportunity to create a new line of collectibles from the Marvel Universe," said Jason Labowitz, Co-Founder of Bif Bang Pow! and President of Entertainment Earth. "With such a vast library and history of characters, we're excited to get started bringing a few fresh ideas to this amazing brand!"

Coming to market in 2016, this new line of collectibles will feature exciting merchandise spanning a wide range of character permutations from classic comic books to modern-day style from television and film. These diverse offerings will include various product types, such as license plate frames, car flags, jack-in-the-boxes, tin windup toys, and wooden figures from Bif Bang Pow!. Additionally, under the Entertainment Earth® brand, JLA Direct, LLC is set to expand its highly popular line of patent-pending Chair Capes™ and release an all-new line of Marvel-themed mixed martial arts (MMA) gear and accessories.

Bif Bang Pow! products are available at Entertainment Earth and other fine retailers. For updates on product releases and pre-orders, visit entertainmentearth.com.

About JLA Direct, LLC (d/b/a Bif Bang Pow!)
Bif Bang Pow!™ designs and develops first-rate merchandise from well-known licenses such as Marvel, The Big Lebowski™, DC Comics™, KISS®, Flash Gordon™, Penny Dreadful™, Mike Tyson Mysteries™, The Big Bang Theory™, Star Trek™, and The Twilight Zone™. Co-founders Jason Labowitz and Jason Lenzi are the ultimate fans of cultish pop culture, so when they created this company in 2005, they took the fan's perspective. Their idea was to bring items to the marketplace that they themselves would want to own. Cultivated from TV, movies, books, comics, music, and more, the Bif Bang Pow! mission is to provide high-quality action figures, toys, and collectibles to the massive cult audience (and any kid at heart) that wishes these toys were already in their collection.

About Entertainment Earth®
Entertainment Earth® - entertainmentearth.com - is the preeminent pioneer and innovator in the worldwide online retail and wholesale toy, gift, and collectibles industry, offering unparalleled expertise and an ever-expanding selection tens of thousands of licensed products. Founded in 1996 and based in Simi Valley, California, Entertainment Earth is renowned for its popular website and print catalog, and its groundbreaking best practices that include a Mint Condition Guarantee™, Risk Free Shopping, and Hassle Free 90-Day Returns.