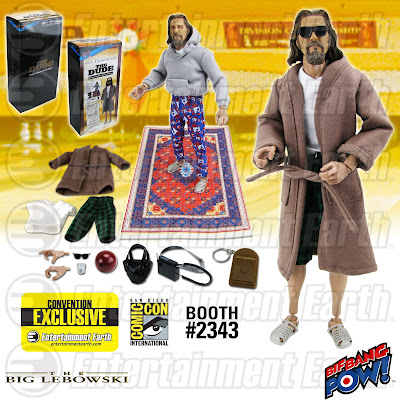 When The Dude abides, he abides in a big way. That’s why Entertainment Earth is bringing you one of the biggest The Big Lebowski collectibles ever - The Big Lebowski The Dude Deluxe 12-Inch Action Figure - Convention Exclusive made by Bif Bang Pow!.

Towering about 1-foot tall, this highly detailed figure features an unbelievable likeness of actor Jeff Bridges who portrays Jeffrey "The Dude" Lebowski in the popular film. In addition to featuring a whopping 25 points of articulation, this massive "Duderino" comes with interchangeable hands and movie-accurate accessories that include a bowling ball, leather-like bowling bag, sunglasses, cell phone, White Russian, jelly shoes, two multiple-piece cloth outfits, talking key chain that speaks 8 phrases directly from the movie, and of course, the rug that ties the whole figure together.

Fans will have the first opportunity to grab this individually numbered limited edition convention exclusive on July 8, 2015 at the Entertainment Earth booth #2343 at San Diego Comic-Con. With a production run of only 486 pieces, this will surely roll out of stock quickly.