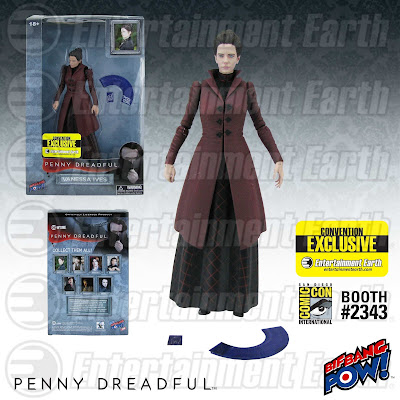 “There are things within us all that can never be unleashed.” Vanessa Ives is a complex mixture of mystery and supernatural mojo. Now collectors can add the seductive enigmatic medium to their collection with the Penny Dreadful Vanessa Ives 6-Inch Action Figure – Convention Exclusive from Bif Bang Pow!.

The intricately detailed figure showcases the beautiful clairvoyant in an ankle long black skirt with a checker square pattern along with a matching maroon vintage Victorian coat which is made of soft and bendable PVC plastic. The rest of Vanessa’s wardrobe is completed by a black turtleneck-esque blouse.

This first ever 6-inch figure of the popular Penny Dreadful character features a whopping 18 points of articulation and includes Vanessa’s trusty set of tarot cards fanned out into one piece along with a separate single card. With a production run of only 3,700 pieces, collectors will want to grab this individually numbered and limited edition Entertainment Earth convention exclusive before it mysteriously disappears!