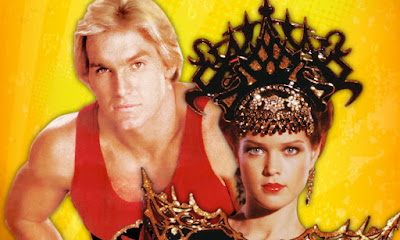 Stop by the Entertainment Earth booth #2343 at San Diego Comic-Con to meet Sam J. Jones, known for his role as Flash Gordon, and Melody Anderson, who portrayed Dale Arden in the popular cult classic movie Flash Gordon. Sam J. Jones is scheduled to appear on Sunday, July 12, 2015, from 10am to 11:30am and Melody Anderson is scheduled to join him on Sunday, July 12, 2015 from noon to 1:30pm. Sam J. Jones is also, well known for his role in Ted and Ted 2.

Visit our booth for more information and while you’re at it, check out all the Entertainment Earth convention exclusives including the Flash Gordon and Ming Hawk City Scene 3 3/4-Inch Action Figure Set - Convention Exclusive made by Bif Bang Pow!.  Oh no!  The evil Emperor Ming is out to destroy Earth but not to fear, Flash is here to save us all!

Convention exclusives are available for the first time on July 8, 2015 at the Entertainment Earth booth #2343 at San Diego Comic-Con.  Fans will have the first opportunity to grab our individually numbered and limited edition exclusives while supplies last!

(*NOTE: Pre-orders made before San Diego Comic-Con 2015 are not guaranteed to be fulfilled based on limited supplies.  Available units will ship after Comic-Con 2015 while supplies last.)