- September 09, 2014
Play rock-paper-scissors-lizard-Spock with your buds - like Sheldon, Leonard, Howard, Penny, and the gang - or just sit calmly in your little nook, curled up with this The Big Bang Theory Rock Paper Scissors Spock Journal. With 320 lined white pages inside, the hardbound book measures approximately 8-inches tall x 5-inches wide on the outside. There's plenty of space to record your most cogent thoughts and brilliant ideas! The cover is black, with the words "Rock Paper Scissors Lizard Spock" in grey, while the spine features The Big Bang Theory logo in red, white, and black. Naturally, the back cover sports scientific symbols and a black-and-grey motif. Ready? One, two, three! Ages 14 and up.

In The Big Bang Theory, Leonard and Sheldon are brilliant physicists – geniuses in the laboratory, but socially challenged in the real world.  Enter beautiful, street-smart neighbor, Penny who aims to teach them a thing or two about life.  Despite their on-again, off-again relationship in the past, Leonard believes he’s found true love with Penny.  Even Sheldon has found a female companion – entering into a “Relationship Agreement” with neurobiologist Amy Farrah Fowler. In their free time, Leonard and Sheldon continue to enjoy frequent trips to the comic book store and fantasy role-playing games with their ever-expanding universe of friends, including fellow scientists Raj and Howard, and Howard's adorable microbiologist wife, Bernadette. 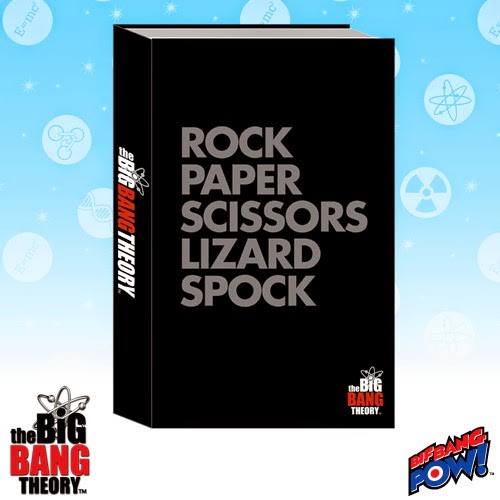