- November 05, 2013
I'm really excited about a new item we just produced! It's a prop replica of The Twilight Zone's Mystic Seer. Best of all, we just got 100 of them signed by William Shatner!  The story goes that back in 1960, Shatner starred in The Twilight Zone episode “Nick of Time”, written by renowned author Richard Matheson. It’s the tale of a young couple who visit a diner that has a penny fortune telling machine called The Mystic Seer. Shatner plays a man who becomes fixated on the machine, convinced it can genuinely see the future and advise him about what he should do. He begins feeding pennies into the machine obsessively, while his wife grows increasingly disturbed by his behavior. The devil’s head on top of the machine looks on impassively. Could it be that the machine is possessed of genuine demonic power?

This became one of the most iconic The Twilight Zone episodes--it was William Shatner’s first appearance on the show and an early starring role for him. When the Disney parks created their homage to The Twilight Zone, "The Twilight Zone Tower of Terror," they created a replica of the Mystic Seer to showcase in the ride in each of their parks. You can see it in the "Hotel Library" portion of the ride, just off of the lobby. In honor of this classic episode, we created a full-size, working prop replica of the device, complete with the same ambiguous fortunes that so bedeviled Shatner, such as: “It has already been taken care of,” “Your chances are good,” “The answer to that is obvious,” and “You may never know.” The prop replica takes pennies and also works as a napkin dispenser and menu holder, just like the original!

We first created a limited run of the prop replica several years ago, but it proved to be so popular that we decided to go for another production run. Creating a prop replica for a black-and-white TV show presents special challenges--there are no color photographs of the item, so we have to use our best judgment at the colors. At Disneyland, the devil's head is red, while at Disney World, the devil's head is cream-colored. For the first time, for this run, the devil's head on top of the prop is in red to match the rest of the device, just like at Disneyland! And we were able to get Shatner himself to sign some of the Mystic Seers. This makes it one of very few Twilight Zone-linked products signed by Shatner. What could be cooler than getting a classic Twilight Zone prop replica signed by William Shatner? But keep in mind that the signed versions are limited to just 100 pieces, and we expect them to go fast! They’re coming out in December, just in time for the holidays!

Will it be selling out quickly? “It is quite possible!”

If you order now, will you be able to reserve your own? “Your chances are good!”


Will this be a prized piece in any Twilight Zone or Star Trek collection? “The answer to that is obvious!” 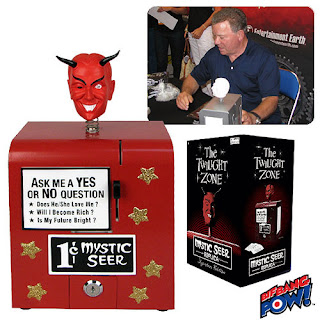