Bif Bang Pow! and Entertainment Earth welcomes world-renowed actor Richard Kiel to his inaugural visit at Comic-Con!  Mr. Kiel portrayed the infamous alien Kanamit in one of the most popular The Twilight Zone episodes of all time - "To Serve Man".  Mr. Kiel later went on to play Jaws, arguably the most popular villain from the James Bond 007 films.  Mr. Kiel will be signing and introducing all-new The Twilight Zone exclusives from Bif Bang Pow!  including Kanamit's Cookbook gift set that includes a Kanamit Cookbook journal, and a new Kanamit EMCE 8-inch action figure inside a Kanamit themed tin-tote. 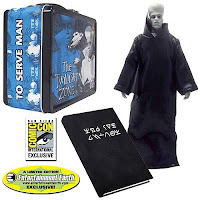 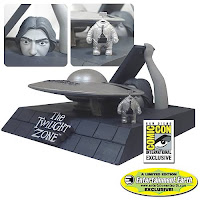 Also new is The Invaders Diorama featuring a memorable scene from famous The Twilight Zone episode.  The resin statue features a diminutive Invader, U.S. Air Force Space Probe No. 1, and a rooftop scene complete with fearsome giant.  This first diorama in this new series is an SDCC Exclusive, limited to 750 pieces. 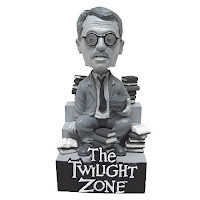 Henry Bemis is back, this time in bobble head form!  Burgess Meredith's memorable role from the 1959 episode "Time Enough at Last" focuses on a nearsighted bank clerk who found himself in a post-apocalyptic world following a nuclear attack. Henry returns now as a wonderfully detailed 7-inch scale black-and-white resin bobble head that measures about 6 3/8-inches tall, including the base. Complete with cracked eyeglasses, he's seated among stacks of his beloved books! 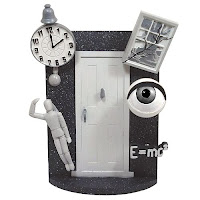 Last year at Comic-Con The Icons of the Twilight Zone bobble head exclusive sold out quickly.  We went back to the drawing board and updated this very popular piece with more accurate icons from the opening sequence of The Twilight Zone.  They include a clock with bell, a cracked window with trees in the background, E=MC2, a doll with hair, and that unforgettable eyeball. The clock, the window, and E=MC2 all bobble! If you acquired the first one, and especially if you missed out on it, don't miss this version - The Icons of The Twilight Zone - Revisted

Please visit sdcc.entertainmentearth.com and our booth for exact signing dates and times, subject to change or cancellation without notice.
Comic-Con The Twilight Zone