- June 08, 2011
Manufacturer Showcases 8 Comic-Con Exclusives and 21 Product Debuts from Doctor Who™, The Venture Bros.™, NCIS™, Lost™, The Twilight Zone™, Dexter™, and Eastbound & Down®

LOS ANGELES, CA (June 8, 2011) - Bif Bang Pow! does it again at Comic-Con International: San Diego 2011 with another astonishing array of brand-new collectibles that includes 8 Comic-Con Exclusives and 21 product debuts from Doctor Who™, The Venture Bros.™, NCIS™, Lost™, The Twilight Zone™, and Eastbound & Down®... plus the first-ever 3 3/4-inch action figure from Dexter™. Starting with these exclusives and debuts, all of our 2011-2012 action figures will be individually numbered.

All products will be available only at the Entertainment Earth® booth #2343. Prices include sales tax, and per-person limits may apply at the show. 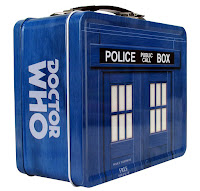 Doctor Who Travel through time and space with Doctor Who and Bif Bang Pow!'s Comic-Con Exclusive Cyberleader and The Master Action Figures. The marvelous EMCE Toys 8-inch scale, retro-styled figures showcase Cyberleader in metallic silver and black, along with a cloaked and magnificently malevolent Master. SDCC will also witness the debut of the Fourth Doctor and Sontaran Field-Major Styre Action Figures. All four are limited editions of 3,000 pieces each that include series-true accessories, real fabric clothing, and multiple points of articulation. (Sold separately, $20 each)

The resin Comic-Con Exclusive TARDIS Bobble Head with Sound ($22) is based on the Classic Series and stands about 6 3/4-inches tall on a themed base. It features the Doctor's favorite mode of transportation, complete with signature materialize and dematerialize sounds, and the entire TARDIS bobbles! The extraordinary 8 5/8-inch wide Doctor Who TARDIS Tin Tote ($15) also debuts... in the likeness of a TARDIS. Both items are limited to 3,000 pieces each.

They all embody that distinctive look and feel of the BBC's Doctor Who, the longest-running sci-fi TV series in the world. 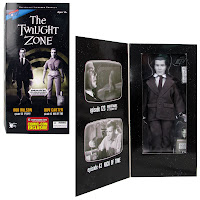 The Twilight Zone Journey to another dimension with articulated, 1970s-style, black-and-white action figures and bobble heads based on fan-favorite episodes of the iconic TV series and licensed from CBS Consumer Products. This Comic-Con Exclusive Bob Wilson / Don Carter Deluxe Figure ($30) sports an 8-inch scale retro-style EMCE Toys body and an all-new head sculpt officially approved by William Shatner. It's a limited edition of just 1,500 pieces that comes with two sets of fabric clothing and accessories to recreate two legendary episodes in which William Shatner starred.

Also making their debut at SDCC are all-new The Venusian, Invader, Doctor Bernardi, and Henry Bemis Action Figures. Each is a limited edition of 1,704 pieces. (Sold separately, $20 each)

The Comic-Con Exclusive Icons of The Twilight Zone Bobble Head ($15) is fashioned of resin and measures about 5-inches tall. It presents five unforgettable symbols synonymous with Rod Serling and The Twilight Zone: clock, swirl, eyeball, spaceship, and E=mc2... and three of them float and bobble! Plus, this 8 5/8-inch wide Rod Serling Tin Tote ($15) is a limited product debut of 1,500 pieces that features series-specific black-and-white artwork and a famous quote.

Watch for the SDCC debut of the series-accurate black-and-white Talky Tina Doll Replica. This eerily lifelike reproduction is a 1,000-piece limited edition that stands 18-inches tall and features fabric clothing, rooted hair, and eyelids that open and close. Tina also speaks five authentic phrases from the spine-chilling "Living Doll" episode of The Twilight Zone. But don't worry, she's only an innocent talking replica... or is she? ($140) 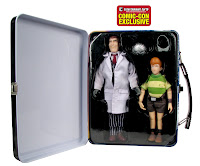 The Venture Bros. Created in conjunction with EMCE Toys, Bif Bang Pow!'s line of first-ever action figures from Adult Swim's The Venture Bros. rolls on with the release of the must-have Comic-Con Exclusive Rusty and Jonas Venture Sr. with Tin Tote ($45), and the debut of these Dr. Girlfriend, Hank, Dr. Orpheus, and Phantom Limb Action Figures (sold separately, $20 each). The exclusive is a limited edition of 1,500 pieces, while the debuts are limited to 3,000 pieces each.

All six 8-inch scale figures are articulated in a 1970s retro style. Complete with accessories, they bring sensational detail and authentic fabric clothing, and each captures that distinctive action-comedy mix that's synonymous with the top-rated television series. The tote measures 8 5/8-inches wide and features episode-specific artwork that is 100% new and was commissioned by the show's artists, Stephen DeStefano and Liz Artinian.

NCIS Actress Pauley Perrette is Abby Sciuto in this 7-inch tall resin bobble head of the irreverent young Goth-girl lab tech from the triumphant CBS series NCIS. Dressed as only Abby can dress, and licensed from CBS Consumer Products, the NCIS Abby Sciuto Bobble Head is a SDCC debut and a must-have for any NCIS addict! ($15)

Eastbound and Down Made of resin and measuring approximately 6 3/4-inches tall, HBO® hit comedy series Eastbound and Down®'s Kenny Powers appears on his The Panty Dropper Jet Ski wearing sunglasses and a white jacket with "Flama Blanca" on the back in this unbelievable Kenny Powers White Suit Bobble Head. Maybe he really is "better than everyone else in the world"! ($15) 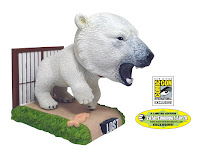 Lost Celebrate the end of an era with brand-new collectibles from ABC's mega-popular TV series Lost. This sensational SDCC Exclusive Lost Polar Bear Bobble Head is crafted of resin and measures about 5 1/2-inches long. Wearing a Dharma Initiative collar, it features the unlikely island inhabitant in superb detail with an incredible themed base that includes a cage wall and fish biscuit! ($15)

And don't miss the debut of the much-anticipated Sawyer, Juliet, Jack, Sayid, Miles, and Claire Action Figures from Bif Bang Pow! Standing on an retro-style EMCE Toys 8-inch scale body with multiple points of articulation and series-authentic fabric clothing, each vintage-style figure is a limited edition of just 1,000 pieces. They're sure to keep the memory of The Island alive! (Sold separately, $20 each)

Dexter Since 2008, Showtime Network's Emmy-nominated drama series Dexter admirers have flocked to pick up our fantastic exclusives at Comic-Con. Not shying away from our responsibilities, we've upped the ante again this year to bring fans this first-ever 3 3/4-inch Dexter action figure! The plastic Dexter Dark Defender 3 3/4-Inch Comic-Con Exclusive Figure is a very limited edition of 3,000 pieces that features 10 points of articulation and comes with an awesome blood-slide accessory. ($15)

"Our incredible fan-base demands it, and Bif Bang Pow! delivers," said Jason Lenzi, CEO of Bif Bang Pow! "Once again, we've kept our word and are bringing to SDCC 2011 a more amazing panoply of product exclusives and debuts than ever before, plus two brand-new licenses that promise even more excitement in the future. Join us in San Diego, July 21-24, for tons of fun and madness at Comic-Con 2011!"

About Bif Bang Pow!
Bif Bang Pow!™ (bifbangpow.com) produces first-rate collectibles for such popular properties as Doctor Who™, Dexter™, Lost™, Californication™, The Venture Bros.™, Eastbound & Down®, Beastly™, and The Twilight Zone™. Founder Jason Lenzi is a seasoned television producer and the ultimate fan of cultish pop culture. So when he created his company in 2005, he took the fan's perspective. His idea was to bring items to the marketplace that he himself would want to own. Cultivated from TV, movies, books, comics, music, and more, Bif Bang Pow!'s mission is to provide high-quality action figures, toys, and collectibles to the massive cult audience (and kids of all ages) that wishes these toys were already in their collection.
action figures Adult Swim Cartoon Network CBS Comic-Con Dexter Doctor Who Eastbound and Down HBO Lost NCIS Rod Serling sdcc Showtime The Twilight Zone The Venture Bros.