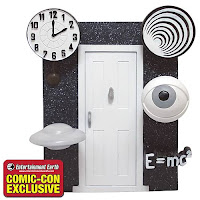 The all-new Icons of The Twilight Zone bobble head has just been announced and is available for pre-order now! This is the fist of a number of exciting Comic-Con exclusives we will be announcing. And just to make things more fun in 2011, we're announcing Comic-Con exclusives that will be available at BOTH San Diego Comic-Con in July as well as New York Comic-Con in October. Online orders will ship after New York Comic-Con.
bobble heads The Twilight Zone