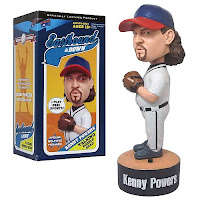 With more heat than a Kenny Powers fastball, the two 7-inch resin bobble heads of the has-been pitcher are already warming up in the bullpen with the first expected to arrive this summer, just in time for Comic-Con International: San Diego 2010 in July. Officially licensed through HBO Licensing & Retail, it features the Kenny Powers character in a baseball uniform. The second bobble head has Kenny in an all-black outfit (complete with sunglasses) that the show's fans will instantly recognize. Both figures voice catchy and unforgettable phrases spouted by Powers throughout the series.

"Bif Bang Pow! is thrilled to be adding HBO and Kenny Powers to its roster of players," said Jason Lenzi, CEO of Bif Bang Pow! "Eastbound and Down is an amazing series, and we've been big fans from opening day. Producing a bobble head like this is a first for the network, and we're extremely flattered to be the company making it happen. To misquote Kenny, 'if you don't grab one of these, you're out!'"

”Bobble heads are big in the world of sports,” said James Costos, Vice President of Licensing and Retail at HBO. “Kenny Powers may not be real, but he’s one of a kind, and we’re happy to see him join the elite club of favorite baseball stars.” Eastbound & Down is a raucously entertaining comedy starring Danny McBride as Kenny Powers, a washed-up major league pitcher who finds himself teaching physical education back in his North Carolina hometown. The show's ratings and popularity surged over its first season, and HBO's upcoming new episodes are eagerly awaited by the series' fervent fan base.

About Bif Bang Pow!
Bif Bang Pow!™ (bifbangpow.com) produces first-rate collectibles for such popular properties as Dexter™, Lost™, Californication™, The Venture Bros.™, Eastbound & Down®, Beastly™, The Twilight Zone™, The Big Lebowski™, and Flash Gordon™. Founder Jason Lenzi is a seasoned television producer and the ultimate fan of cultish pop culture. So when he created his company in 2005, he took the fan's perspective. His idea was to bring items to the marketplace that he himself would want to own. Cultivated from TV, movies, books, comics, music, and more, Bif Bang Pow!’s mission is to provide high-quality action figures, toys, and collectibles to the massive cult audience (and kids of all ages) that wishes these toys were already in their collection. Bif Bang Pow! is a unit of JLA Direct, LLC.

About HBO Licensing & Retail
HBO Licensing & Retail officially licenses the HBO® brand for the development and merchandising of innovative product lines inspired by the network’s award-winning programming. With products created around classic series like the The Sopranos® and Sex and the City® to current hits like True Blood® and Entourage®, items include fashion apparel, jewelry, digital and CD soundtracks, games, books as well as exclusive, premium collections in partnership with upscale designer brands. Merchandise can be purchased in retail stores, at http://store.hbo.com, and at the groundbreaking HBO retail hub, the HBO Shop®, located at 42nd and 6th Avenue in New York City. HBO Licensing & Retail products are also sold internationally across Europe, Asia and Australia.
bobble heads Danny McBride Eastbound and Down HBO Kenny Powers