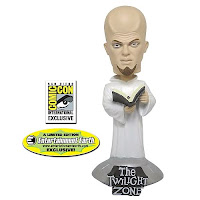 Continuing with our theme of The Twilight Zone bobble heads in color, our fifth and final exclusive The Twilight Zone bobble head for SDCC 2010 has been announced! It's our friend Kanamit, the "friendly" alien who actually has a cook book on how to serve humans. Limited to just 504 pieces, Kanamit will be making his debut at San Diego Comic-Con 2010. Based on The Twilight Zone's rather disturbing and fan favorite "To Serve Man" episode from 1962.
Attending San Diego Comic-Con July 21-25, 2010? Just stop by booth #2343 and be the first to pick up this item anywhere. No need to order now. (Prices and availability subject to change.)

Can't make it to Comic-Con? Order now for shipment after the convention (while supplies last).
bobble heads Kanamit Richard Kiel The Twilight Zone