Another year, another Comic Con! 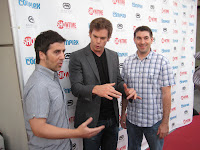 Jason Lenzi here, and I know it's been waaaay too long between posts, so apologies up front. Hopefully this message and all the gear we've been working on will somehow make up for our neglecting you these past few months.

Well, once again, Bif Bang Pow! was bigger and better this year at the 40th Anniversary of the San Diego Comic Con, and it seemed the fans just couldn't get enough! We had not one, not two, but EIGHT different exclusive SDCC items, from 'Dexter', 'The Big Lebowski','Flash Gordon' and our newbie, 'LOST', and the loyal BBP!-ers seemed to pick 'em all up! 'Dexter' definitely got most of the buzz, helped in no small part by creepy baby faces everywhere you looked and the hottest tote bag of the con, but Ben Linus and his bobbling, beat up little head wasn't far behind. We also got some great feedback on all the prototypes on display, and debuted our very first two character figures from 'LOST', Jack and Sawyer, and if reaction is anything to go by, they're going to join the ranks of other BBP! winners the Dark Defender and The Dude Unemployed and make a very special mark in the action figure world.

But as they seem to say in every Oscar acceptance speech, we certainly couldn't have gotten all of this accomplished by ourselves, so I'd like to thank: all the good people at Showtime for putting together such an amazing campaign and creating such buzz; Michael C. Hall, Julie Benz, Jennifer Carpenter, CS Lee, David Zayas, John Lithgow and James Remar for being the best, most fan friendly cast ever; the producers and licensing folks at ABC for getting Jack and his buddy out and onto the shelf; CBS for help with all things 'Twilight Zone'; Universal and Beanstalk for help with His Dudeness, and last but far from least, all the fans that came by to make purchases, check out our stuff, get pictures and blog about our merchandise, and take a few extra minutes to thank us for making some of their collecting dreams come true.

I know we keep saying it, but trust me, next year will be even bigger. Now if you'll excuse me, I gotta rest up for it!