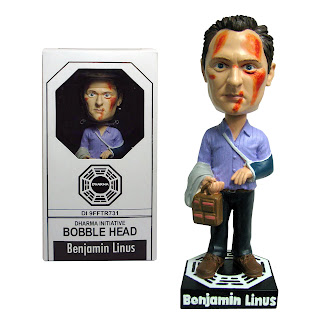 
LOS ANGELES, CA (June 25, 2009) – Bif Bang Pow! unveils the first in a line of collectibles based on the immensely popular ABC series Lost at Comic-Con International: San Diego 2009. And there's more to come with a special array of bobble heads and articulated action figures with story-specific accessories already in the works.

The creepy and enigmatic Benjamin "Ben" Linus is the first to be released in bobble head form, available exclusively at the Entertainment Earth booth (#2343) at Comic-Con International: San Diego 2009, July 23-26. Based on recent storylines from the show, he comes bruised and bloodied with his arm in a sling… but you wouldn't want him any other way! He stands on a Dharma Initiative logo base and comes in Dharma Initiative packaging. Only 1,008 pieces of this Comic-Con Exclusive will be produced. (Retail price: $17 including tax - while supplies last - limit two per person.)

"The twists, turns, and multiple threads that characterize Lost give rise to a host of distinctive and unforgettable characters. These characters lend themselves to the creation of unique figures and accessories that have terrific fan appeal and serve to memorialize this exceptional TV series," said Jason Lenzi, CEO of Bif Bang Pow! "We're thrilled to be bringing new bobble heads and poseable action figures to market in the vein of what Bif Bang Pow! has done with licenses in the past. As always with Lost and Bif Bang Pow!, expect the unexpected!"

About ABC Studios
ABC Studios is a leader in the development, production, and strategic distribution of entertainment content across television and emerging digital platforms. As a key content driver for the Disney-ABC Television Group, the studio will produce 19 productions for broadcast and cable television in the 2009/10 season.

About Bif Bang Pow!
Bif Bang Pow! (bifbangpow.com) produces first-rate collectibles for such popular properties as Dexter, Lost, Californication, The Twilight Zone, The Big Lebowski, and Flash Gordon. Founder Jason Lenzi is a seasoned television producer and the ultimate fan of cultish pop culture. So when he created his company in 2005, he took the fan's perspective. His idea was to bring items to the marketplace that he himself would want to own. Cultivated from TV, movies, books, comics, music, and more, Bif Bang Pow!’s mission is to provide high-quality action figures, toys, and collectibles to the massive cult audience (and kids of all ages) that wishes these toys were already in their collection. Bif Bang Pow! is a unit of JLA Direct, LLC.
ABC action figures Ben Linus bobble heads Lost Michael Emerson

Please make the Jack figure in his jungle wear(jeans,sleevless top,backpack,gun)with all those tattoos showing,and not the suit again!!! Thanks BBP!!!
12:00 PM

Will Bueche said…
Since the first series of action figures will be Sawyer, Juliet, Jack, and Kate, I wonder if you're making them in the Dharma jumpsuits. Both Jack and Sawyer wore the same brand and model of Dharma jumpsuit (the khaki colored Bulwark CLB6 Deluxe Coverall, with different color undershirts), and Juliet and Kate wore identical jumpsuits too (the blue ones, not sure of the brand).

The Dharma-suits makes the figures more economical to produce -- 2 bodies for 4 figures, so that's my expectation of what you're planning. That's fine, if that's the initial plan. I'm just happy Juliet will be made!

Please don't make them as cartoony as you sometimes do. Thanks! (And please make action figures for The Fifth Element too).
6:39 PM

Will Bueche said…
New theory: molded costumes underneath, and fabric jumpsuits optionally worn over them! This is perhaps the one and only time when an ill-fitting fabric layer is actually ill-fitting in real life too (those jumpsuit's aren't exactly tailored)!
8:06 PM