Prepare to enter another dimension.... 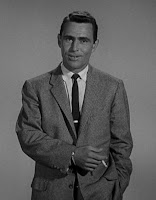 ... a dimension of the coolest collectibles anywhere!

Hello everyone, Lenzi with you again, to give you some of the most exciting news to have ever come out of Bif Bang Pow! headquarters. We are proud to announce we've obtained the license for one of the greatest properties ever conceived: 'The Twilight Zone'. Just in time for the iconic series 50th Anniversary, we'll be producing collectibles from the series in the form of statues and bobble heads-but some will have, let's say, 'special' twists to them, much like the series itself. And most exciting of all, for the first time, we'll be bringing the world 3D representations of the man himself, Rod Serling. Serling is one of my personal heroes, and I couldn't be more excited about this property. We aim to do the genius of Serling justice, both in our representations of him and the many creatures and characters that live in that fantastic universe. There's lots more news to come, but the first product should hit in time for San Diego Comic-Con 2009, and just wait til you see the exclusive we have planned. It'll have all the BBP! trademarks of quality and thinking outside the box. Or in this case, outside the normal dimensions. Bif Bang Pow!- officially entering the 'Twilight Zone'. Won't you join us?
CBS Rod Serling The Twilight Zone