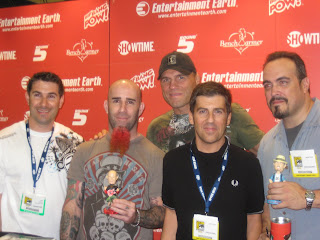 How's everyone doing? Still recovering from the adventures in San Diego? I know we are, and while we do, I wanted to drop a line here on the 'ol blog that the kids love so much.

Face it, you folks are a pretty special bunch. Why? Because you're the ones who are spending time in the company of the coolest roster of personalities to come along from a toy company in years: Dexter Morgan, Jeffrey Lebowski, Scott Ian, and Ming the Merciless (not sure what his last name is, frankly....) to name a few. And if this year's San Diego Comic Con is anything to go by, alot of people are catching on to your instincts, 'cause more people got on the BBP! train than ever before.

All of our SDCC exclusives sold like the proverbial hot cakes, and the buzz for all our upcoming waves is reaching fever pitch. In fact, rumor has it that next year, the convention center won't be big enough to hold all of what Bif Bang Pow! has planned for it! Start booking your rooms now, folks.

So after all the blood, sweat and tears have dried, we'd like to take a moment and thank all of those special people that made it all worthwhile and made our chests puff out just a bit more: Showtime, Universal, King Features, Michael C. Hall, Julie Benz, David Zayas, Mr. Scott Ian, Esq., Sam J. Jones, Randy Couture, Mark Ecko, Mike Nelson and the guys from RiffTrax, John Landis, Peter David, Seth Green, Daniel Pickett and the gang at Action Figure Insider, Justin Aclin and Toy Fare Magazine and most of all, YOU. The fans that waited in line, got there early, bought two of each item, and took the time to pull us aside and thank us for doing what we're doing and praise our efforts. It means everything to us.