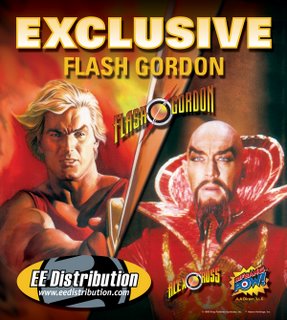 LOS ANGELES, CA – For the first time ever, toys based on the 1980 film Flash Gordon are coming to retail stores. Bif Bang Pow! is teaming up with renowned comic book artist Alex Ross and King Features Syndicate to create collectible action figures based on the cult 1980 film classic, Flash Gordon, which featured the fight between Flash Gordon (Sam J. Jones) and Ming the Merciless (Max von Sydow). The worldwide license covers figures standing between 2 and 13-inches tall as well as related accessories, vehicles and plush toys.

"We’re thrilled to bring the best talent and the best licensed properties together," said Jason Lenzi, president and founder of Bif Bang Pow! "When we first started to explore the license, I knew we had to reach out to Flash Gordon’s biggest fan in the industry, Alex Ross, to get involved. Having Alex contribute to and approve the designs for the action figures is a real milestone. Combining his unmistakable style applied to the likes of Flash Gordon, Dale, Prince Barin and of course, Ming, is a match made in pop culture heaven."

"Flash Gordon is still my favorite movie of all time. It inspires me to this day," said Alex Ross. Best known for his vintage inspired artwork of DC Comic's superheroes in comics such as Kingdom Come, Ross will be serving as art director for the action figure line. Providing his trademark look and feel on the range of Flash Gordon characters, Ross will bring his legendary eye for detail to the classic costumes and characters of director Mike Hodges’ original film.

"When I was a kid I custom-made a set of Flash Gordon action figures for myself," Ross said. "Now I’m finally going to get the real thing. It’s one of my strongest childhood dreams come true."

Scheduled for initial release in 2007, the entire Flash Gordon movie toy line will be exclusively distributed through EE Distribution (www.eedistribution.com), a division of Entertainment Earth, Inc., and sold direct to consumers at www.entertainmentearth.com and other fine toy retailers throughout the world.

About King Features Syndicate
King Features Syndicate is a member of Hearst Entertainment and Syndication Group, which combines The Hearst Corporation’s cable network partnerships, television programming activities, and newspaper syndication and merchandise licensing operations. King Features is the world’s premier distributor of comics, columns, editorial cartoons, puzzles and games, distributing some 150 features to nearly 5,000 newspapers around the globe. It is one of the largest and most experienced organizations in merchandising licensing. Among its most beloved and successful classic characters are "Popeye," "Betty Boop, "Blondie" and "Dennis the Menace." In recent years, the company has diversified and now represents properties such as the trendy apparel and accessory brands David & Goliath and Chat Gurlz; the publicly displayed, life-size art sculptures GuitarMania and The Trail of Painted Ponies; and the conscientious-living brand "Mutts."

About Alex Ross
Alex Ross’ (www.alexrossart.com) photorealistic paintings have made him one of the most famous names in comics. His critically acclaimed works include Marvels (Marvel Comics) and Kingdom Come (DC Comics). In 2003, Alex was the subject of a ten-year retrospective of his work for DC Comics entitled Mythology (Pantheon). He is currently working on the 12-part maxiseries Justice, also for DC Comics. His non-comics work includes the poster for the 2002 Academy Awards, covers for TV Guide and the Village Voice, and the opening credit illustrations for Spider-Man 2.

About Bif Bang Pow!
Bif Bang Pow! (bifbangpow.com) founder Jason Lenzi is the ultimate fan of cultish pop culture. So when he created his company in 2005, he took the fan's perspective: His idea was to bring items to the marketplace that he himself would want to own. Cultivated from TV, movies, books, comics, music, and more, Bif Bang Pow's mission is to provide high-quality action figures, toys and collectibles to the massive cult audience (and kids of all ages) that wished these toys were already in their collection. Bif Bang Pow! is a unit of JLA Direct, LLC.

About EE Distribution / Entertainment Earth, Inc.
Based in Los Angeles, California, Entertainment Earth (entertainmentearth.com) is a leading worldwide multi-channel cataloger, retailer, and distributor of action figures, gifts, and collectibles. Founded online in 1996, Entertainment Earth offers over 5,000 licensed products and has pioneered best practices in the industry with innovations for retail clients such as a Mint-Condition Guarantee, Risk Free Shopping, and Hassle Free 90-Day Returns.